The newest version of the gold standard in consumer/entry-level professional quadcopters is here: the DJI Phantom 4 Pro V2.0.

The Phantom 4 Pro V2.0 flies with stability, maneuverability, a long range, and both obstacle recognition and obstacle avoidance. Return to Home still comes on automatically if battery reserves run low. And it does all of this more quietly than ever, perfect when flying in sensitive areas or at events, including weddings.

Phantom 4 Pro V2.0 has the video and still quality needed not only for weddings, but also for TV news coverage, shooting commercials and recording video for quality web pages: ultra-high-definition 4K video at up to 60 frames per second, and remarkably crisp 20MP stills with high clarity due to the camera’s remotely selectable stops in its dynamic range.

For the first time, because if its new OcuSync HD transmission technology, a Phantom 4 can link wirelessly to optional DJI Goggles for a completely immersive flight experience and control by head movement.

OcuSync HD, the most sophisticated transmission system from DJI, is standard on the Phantom 4 Pro V2.0. It sends commands and transmits/receives video transmissions up to 4.3 miles. OcuSync transmits in two frequencies: 2.4GHz and 5.8GHz. It automatically and seamlessly switches between the two frequencies to avoid interference.

With OccuSync, you also can connect DJI Goggles wirelessly to the Phantom 4 V2.0, allowing you to take advantage of the full range of DJI Goggles capabilities. With the optional goggles, you can visually immerse yourself in the Phantom 4 Pro V2.0 flight. You also can issue commands with head movements.

The combination results in 4dB lower noise generated when flying—a reduction of 60 percent.

The Phantom 4 Pro V2.0 comes Ready To Fly. That means only minor, non-soldered assembly is required. Everything you need is in the box, except for your smartphone or tablet, either of which you will connect by USB cable to the remote controller.

The capabilities of the camera make a very clear “Pro” statement. The 1-inch CMOS sensor more than doubles the pixels in non-Pro Phantom 4 cameras. It provides more definition in both video and stills.

20MP stills: The bigger sensor takes stills to an outstanding 20MP on the Phantom 4 Pro V2.0, up from 12MP on earlier P4s. And the maximum burst rate doubles to 14fps from 7fps on earlier P4s. Those are huge improvements for professional photographers.

Adjustable aperture: Remember when you had to attach a filter on bright days to reduce the light entering through the Phantom 4’s fixed f2.8 aperture? On the Phantom 4 Pro, you can adjust the aperture through a dynamic range of f2.8 to down to f11, directly from your remote controller. That’s helpful for taming bright sunlight and for increasing depth of field. Optional filters, of course, are still accommodated.

Distortion-free shutter: The mechanical shutter on the Phantom 4 Pro prevents rolling distortion. If you have shot really fast action from an earlier Phantom 4, you might have encountered distortion. A photo of a racecar, for instance, would produce oblong tires because the camera couldn’t freeze action that fast. Now the rotating tires look like tires, not like a distant galaxy spinning in space.

Shutter speeds: The mechanical shutter has manually adjustable speeds from 8 seconds for time exposures to 1/2000 second for freezing action. The electronic shutter adjusts from 8 seconds to 1/8000 second.

You need a flight program that does more than tell your drone how fast and in which direction to go. How about a program that provides total camera control, with onscreen adjustments for aperture, ISO, shutter and shooting formats? That’s DJI Go 4. Maybe you want changes in flight data to show up immediately in front of you. Or you want to easily check video transmission data. Maybe you want to be reminded of what flight mode you’re in. It’s all there with DJI Go 4, along with a variety of helpful flight modes.

TapFly: Just tap on the screen to point your drone in that direction. It will automatically avoid obstacles, unless you’re in TapFly Free. In Tap Fly Free, the drone goes in the direction you tell it but you can separately control the camera and gimbal. That leaves your hands free to concentrate on aerial video or photography, not on flying the aircraft. With TapFly Forward, the Pro will go forward to where your tap points it, with the camera and gimbal straight ahead. In TapFly Backward, the drone flies backwards in the direction opposite of where you tapped on the screen, with the camera and gimbal again aimed to the front of the aircraft.

Draw: Here’s another program that lets you concentrate on controlling the camera on your Phantom 4 Pro. Use your finger to draw your route onscreen, and the aircraft will follow it. Draw Standard allows the drone to follow the indicated path with the camera facing the direction of flight. Draw Manual really helps with creative video and photography by telling the drone to follow the path only when you command it to move, while you aim the camera wherever you want.

Return to Home: This program is your security blanket when you signal the Phantom 4 Pro to return to base. It also automatically boots when the signal is lost. The aircraft follows the safe path it just took, or if that path is unavailable, it finds its way using GPS and obstacle avoidance.

Active Track Locks Onto Your Subject

A lone pilot who also has to operate the camera will appreciate ActiveTrack. The program makes it much easier for a solo operator to take quality video and photos by locking onto and tracking the subject. The aircraft adjusts to the subject’s speed, whether he slows or speeds up. Available are three modes:

Trace: Follow in front of or behind the subject, using obstacle avoidance.

Spotlight: Recognize and keep the subject in the frame while you fly in any direction, looking for the unusually expressive shot. This works best with a still or slow-moving subject.

The Phantom 4 Pro is safer to fly than earlier Phantom 4 drones because it has more sensors to detect obstacles. Older Phantom 4 aircraft had sensors up front. The Pro V2.0 has sensors on the front, both sides, the bottom and the back. It will sense obstacles in all those directions. It will avoid obstacles in the front, sides and back. P4P can sense obstacles as close as 7 inches and as far away as 23 feet at up to 31 mph—really useful if you’re flying near trees or indoors. The security from five-directional sensing generates confidence to get in, get a difficult shot, and get out safely.

Professionals can’t afford to scratch a mission because a drone’s positioning hardware fails. That’s why the Phantom 4 Pro has redundant compasses and IMUs. If one of either fails, the redundant sensor takes over, and the flight continues. Reliance on the backup sensor is seamless. Phantom 4 Pro also relies on two satellite systems: GPS and GLONASS, the Russian system. If GPS becomes unavailable, the other system can be used.

The Phantom 4 Pro V2.0 remote controller operates at up to 4.3 miles. Video is transmitted by OcuSync in 1080p, or 720p at farther distances. Two frequencies are available for transmissions: 2.4Ghz and 5.8Ghz. The Pro will switch between frequencies automatically if it senses interference from cell towers, WiFi or some other source.

The DJI Intelligent Flight Battery is the smartest drone battery on the market, and that makes it highly reliable. It’s smart enough to prevent overcharging or over draining. It even protects against damage during storage by slowly discharging power. An Intelligent Flight Battery tells you, through the DJI Go 4 flight program, how much power it has in reserve. Reserve running low? Return to Home mode will get your Phantom 4 Pro safely back to base before power is gone. But don’t worry: Each battery gives the Phantom 4 Pro V2.0 up to 30 minutes of flight time.

When you return to base for a fresh battery, the Phantom 4 Pro remembers its takeoff spot and lands there, making landings easier. It then returns to the precise spot where you had been recording, because it remembers that, too. Since you flew there safely, P4P V2.0 remembers the flight path. When Return to Home is activated, whether by you or automatically by the flight program when a signal is lost, the aircraft uses the safe path to get back to base.

If you want a Phantom 4 Pro V2.0 with an ultra-bright monitor for the controller, get the Phantom 4 Pro+ V2.0 Quadcopter with 5.5-Inch Screen. The 1080p monitor is made for the P4P+ controller with OcuSync. It is more than twice as bright as the screens on a tablet or smartphone. That means you’ll see better and maintain control better in bright sunlight. And the DJI Go 4 app is built right into the screen. 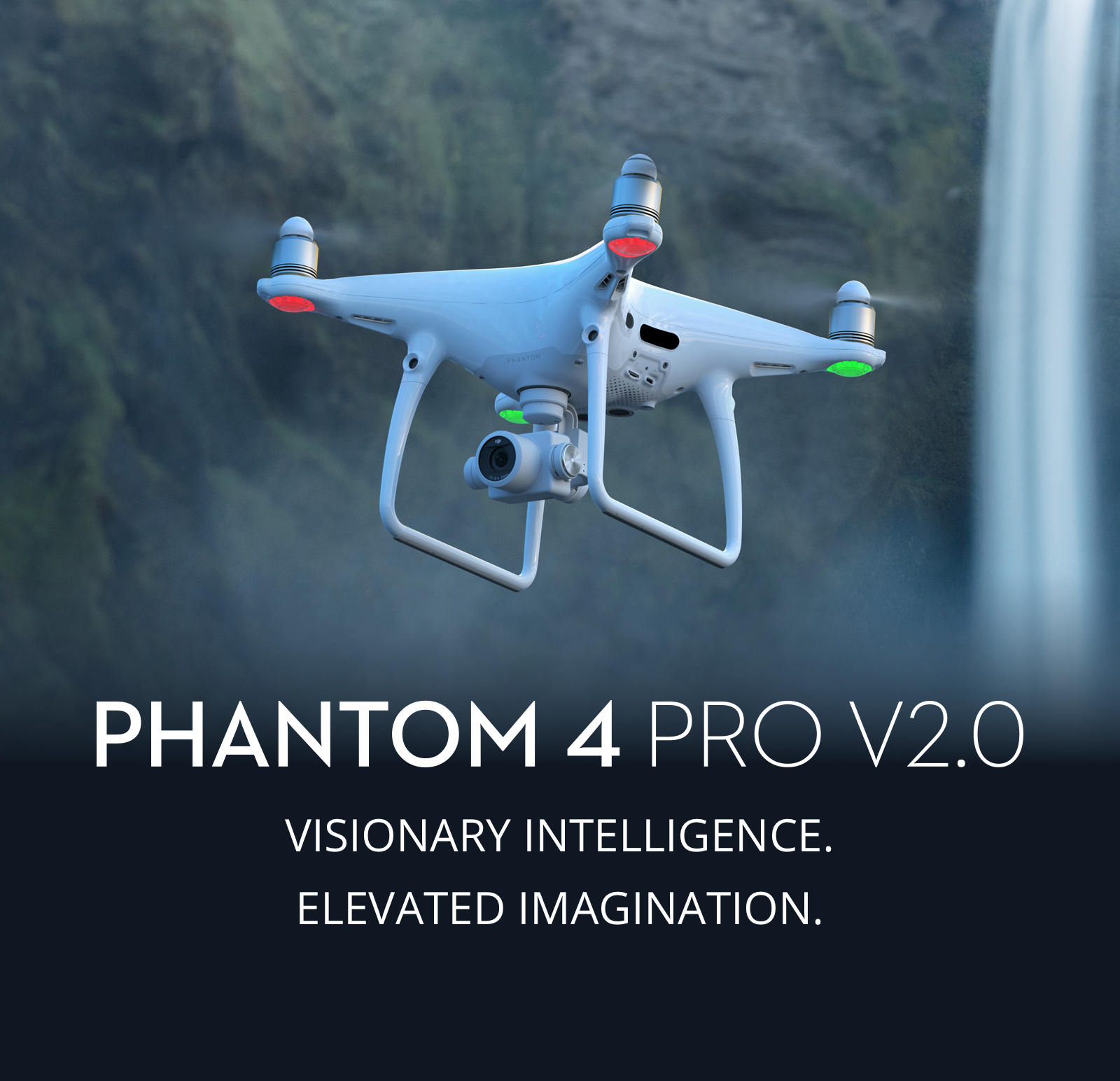 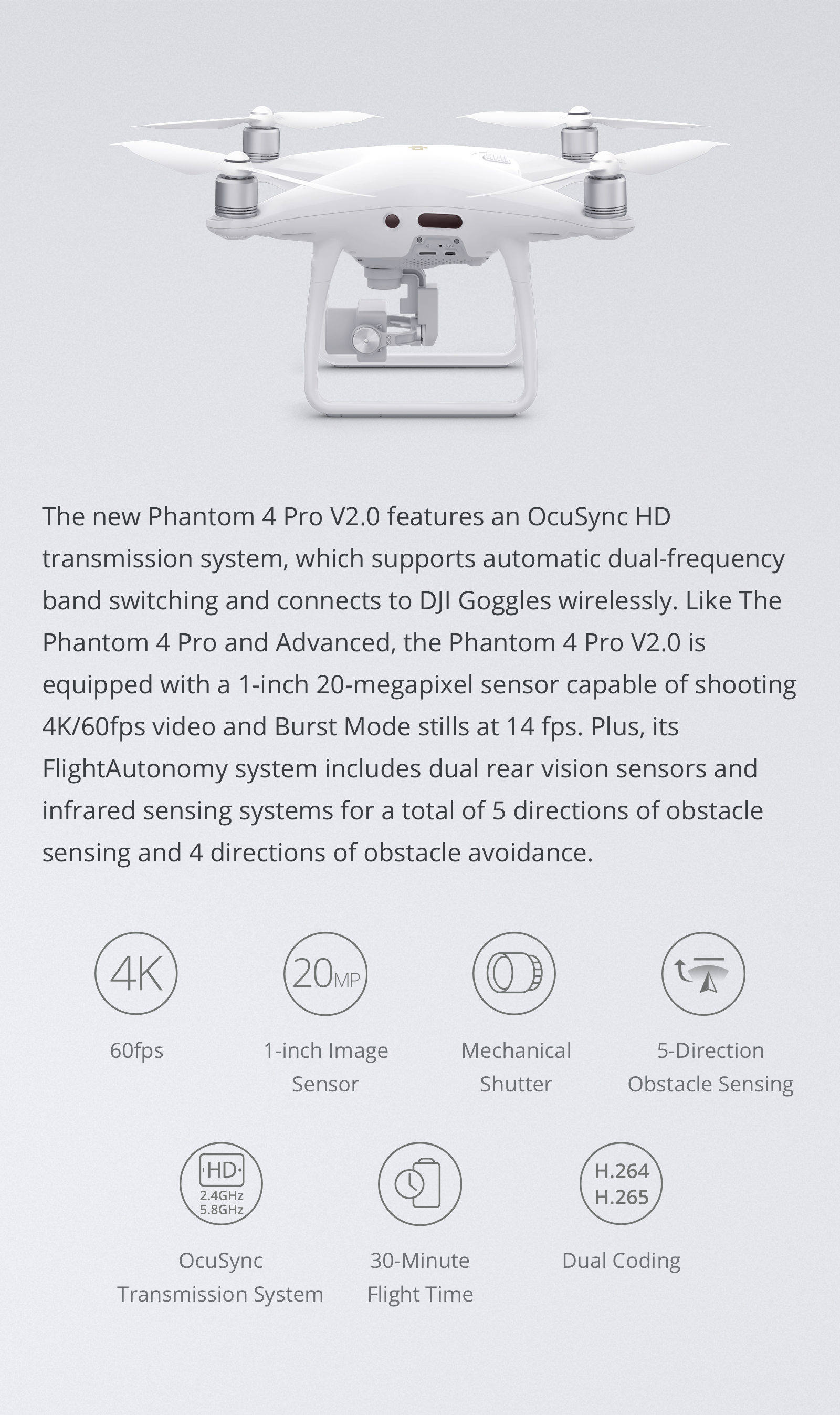 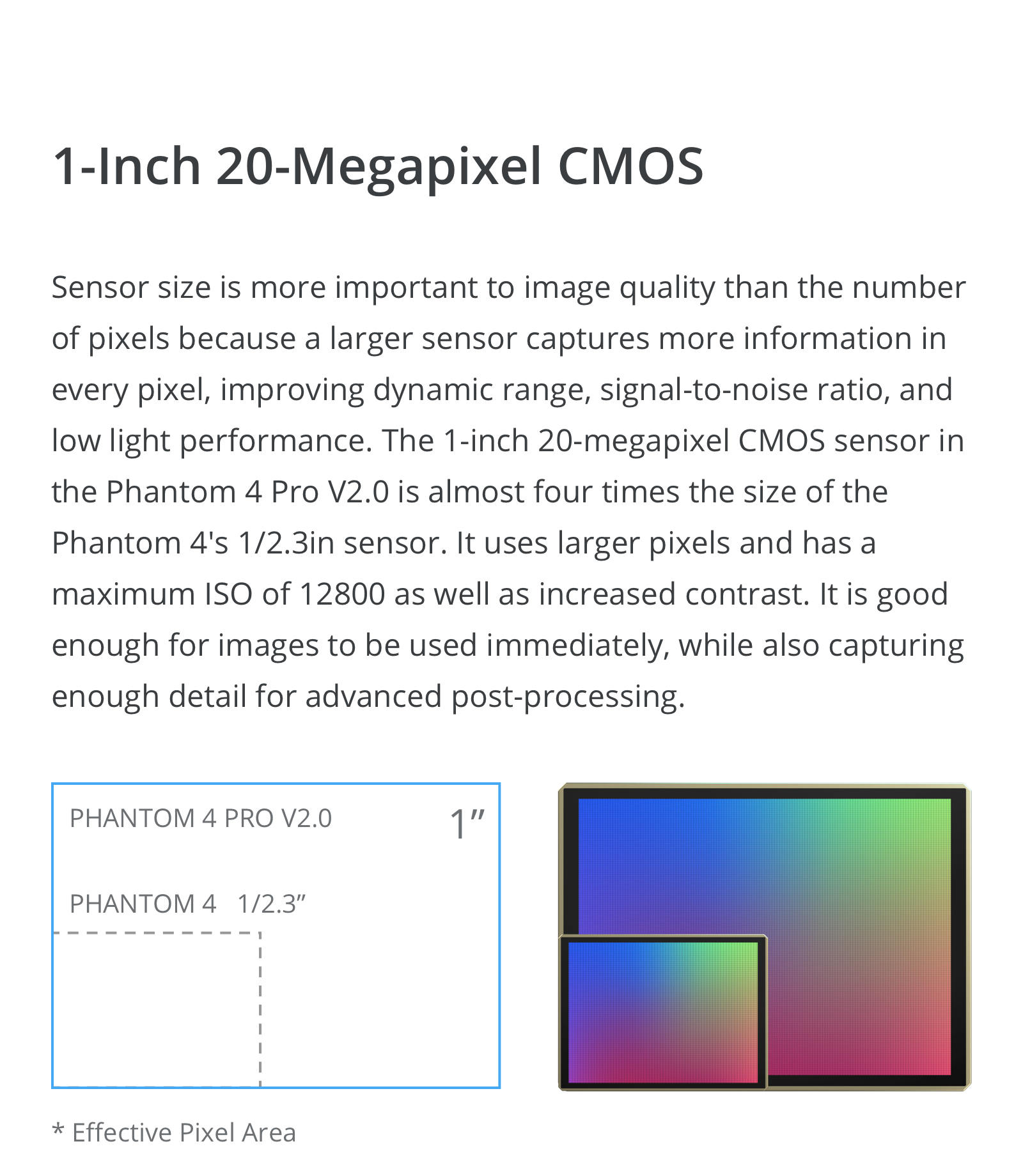 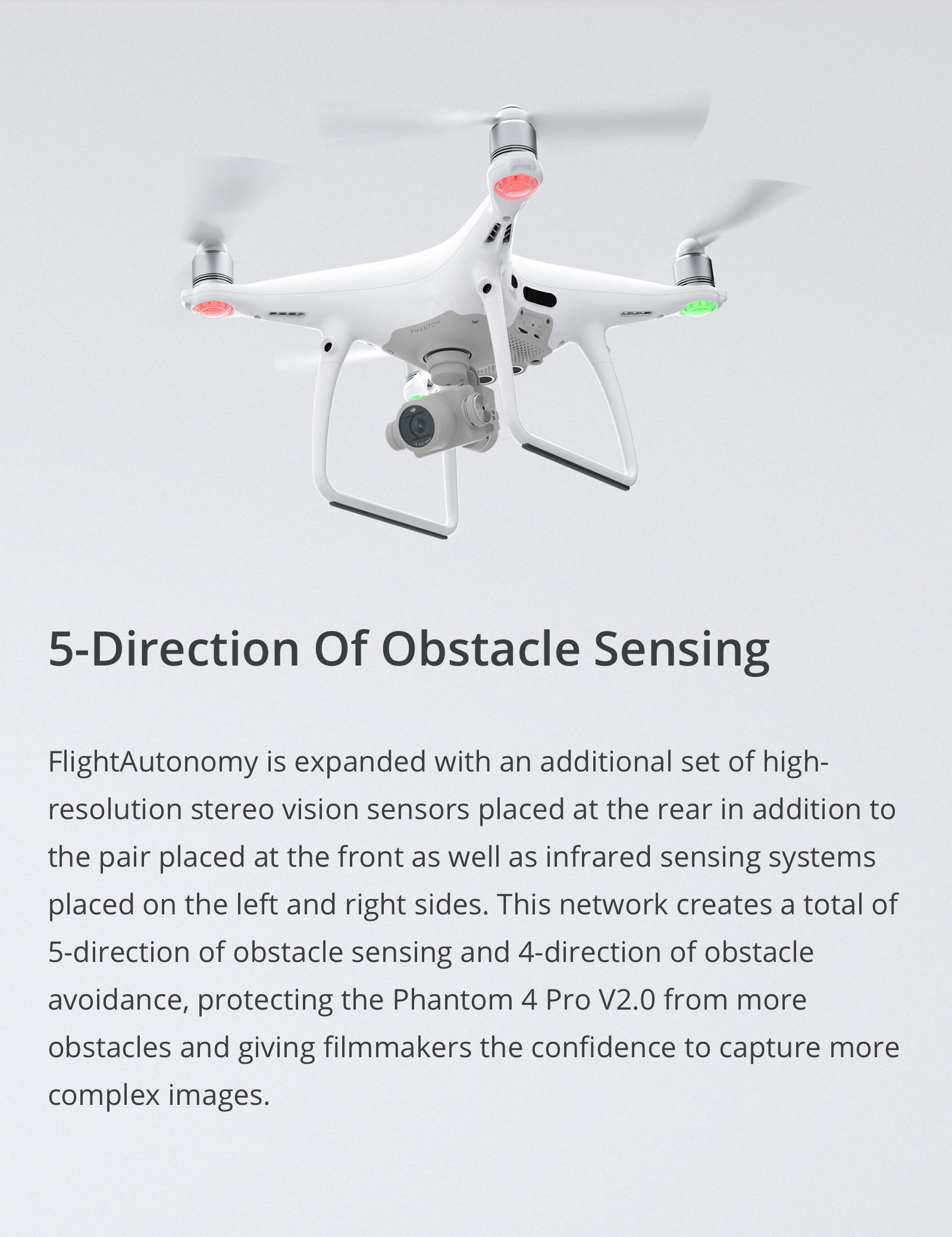 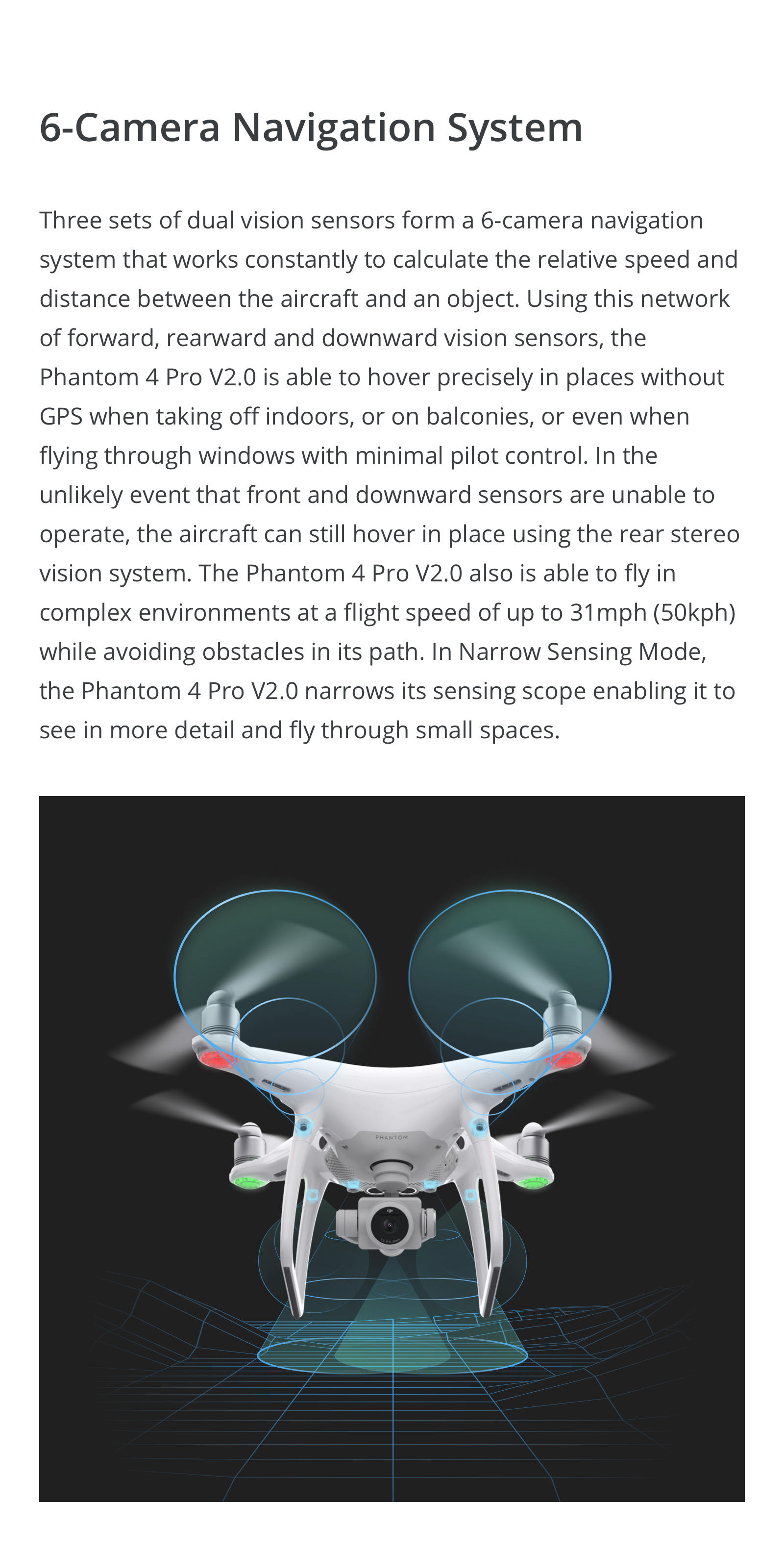 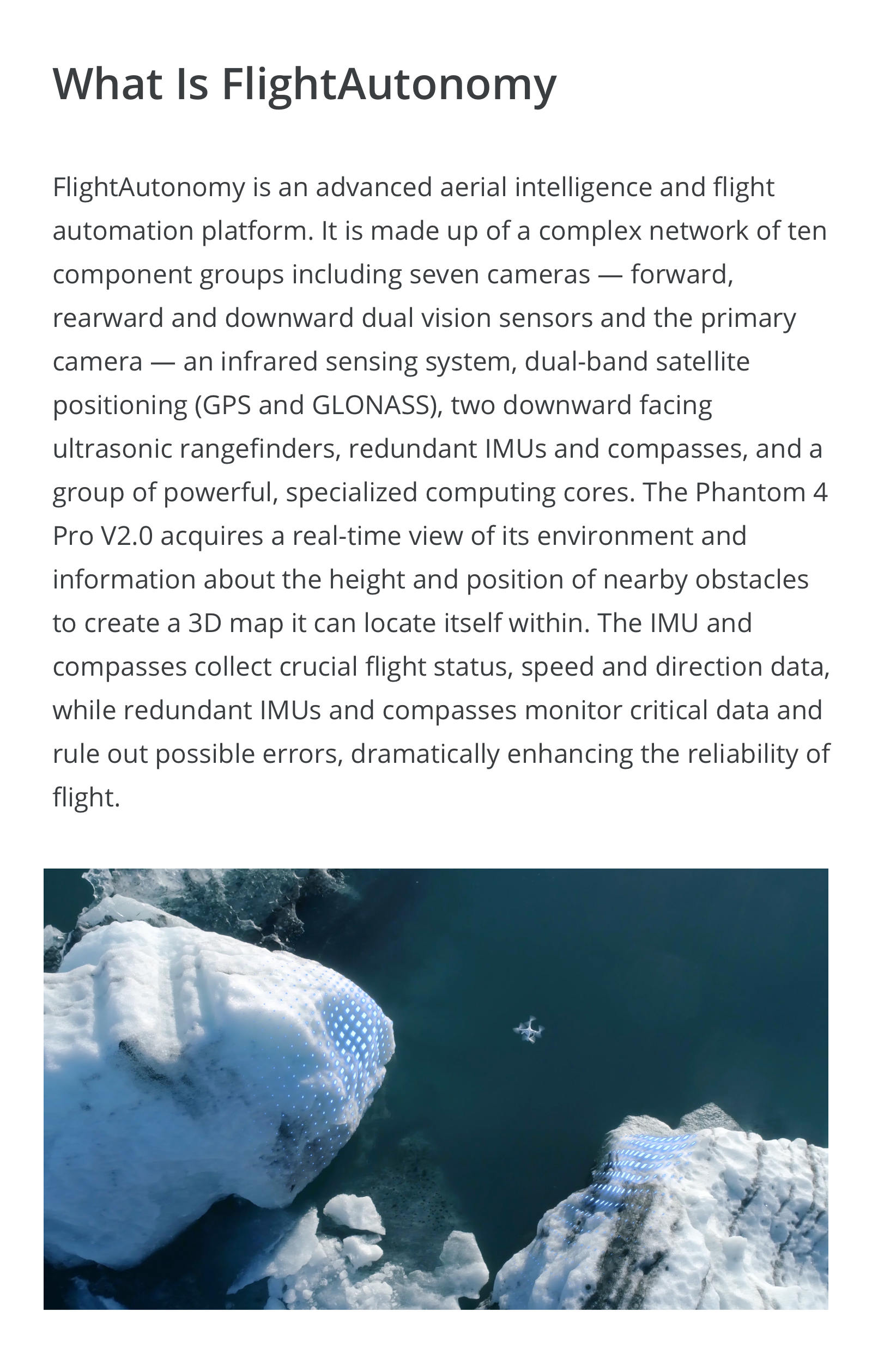 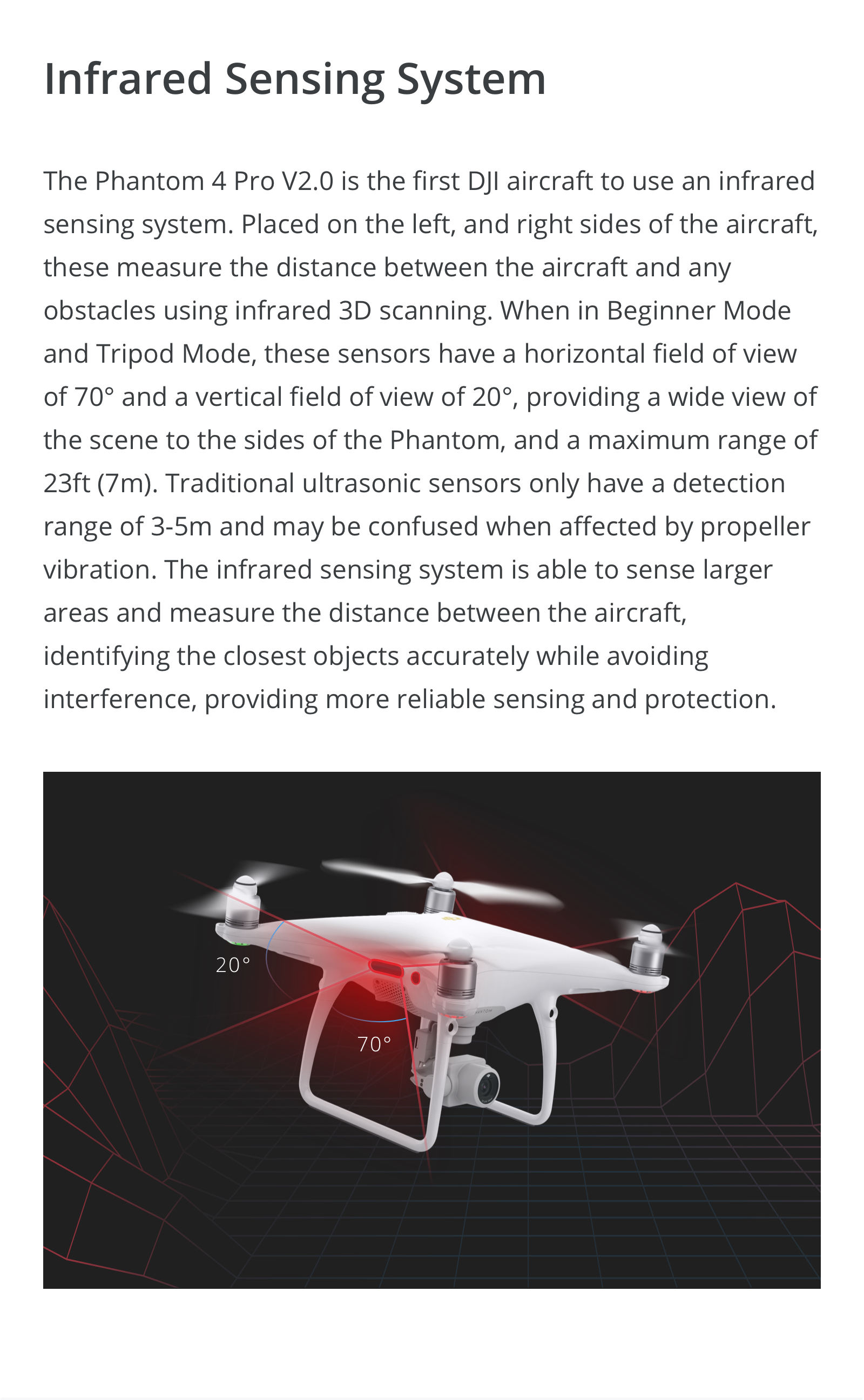 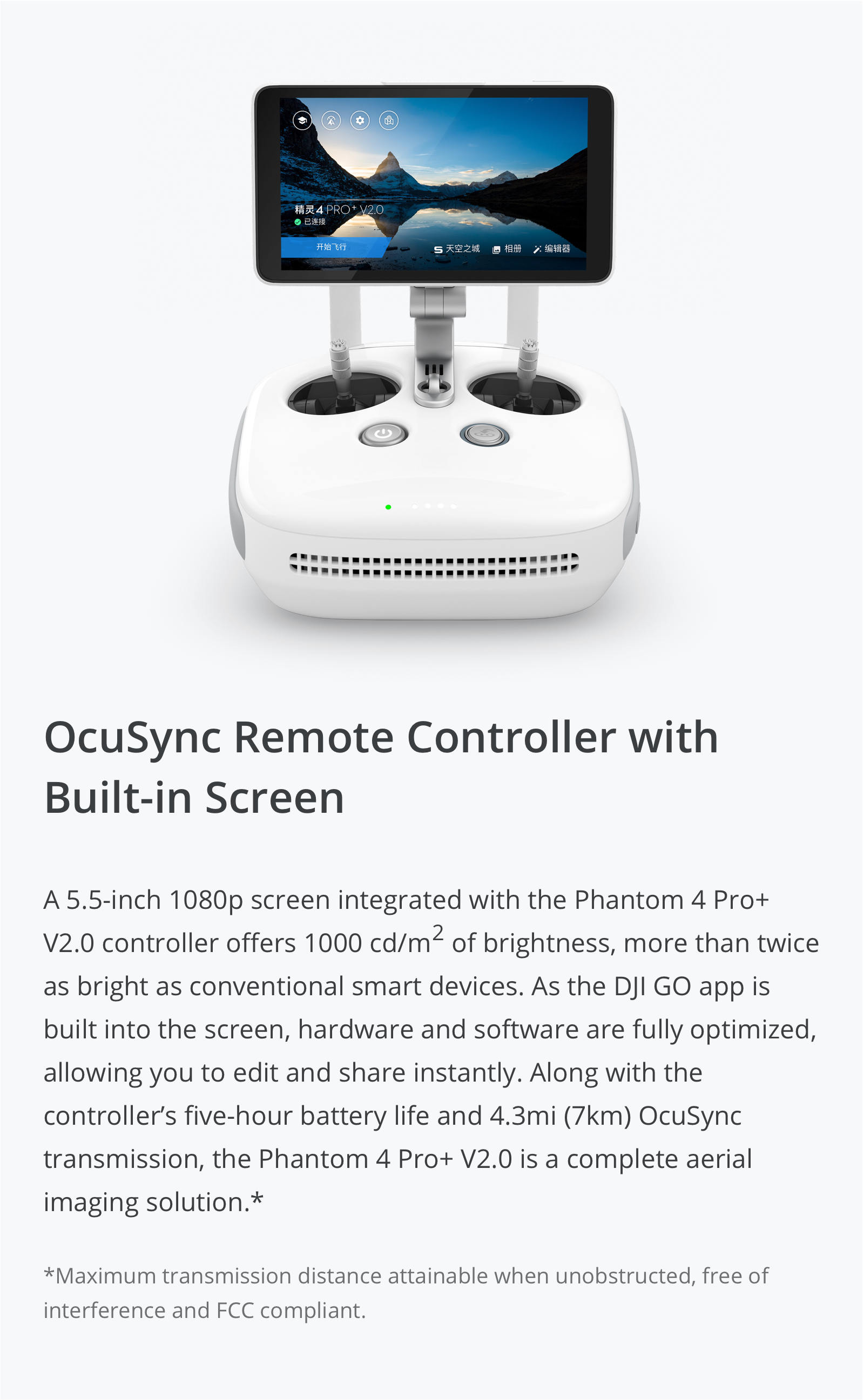 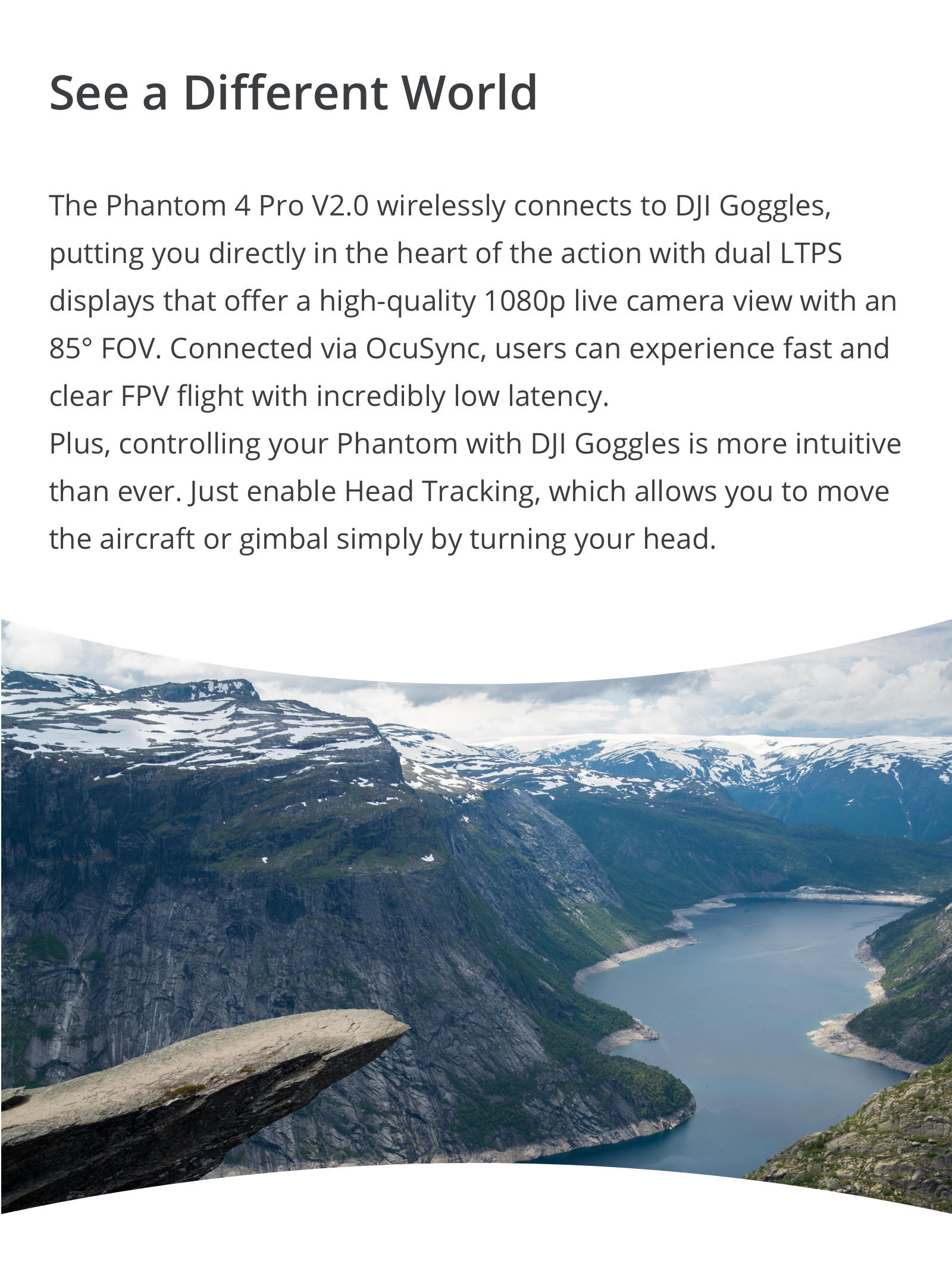 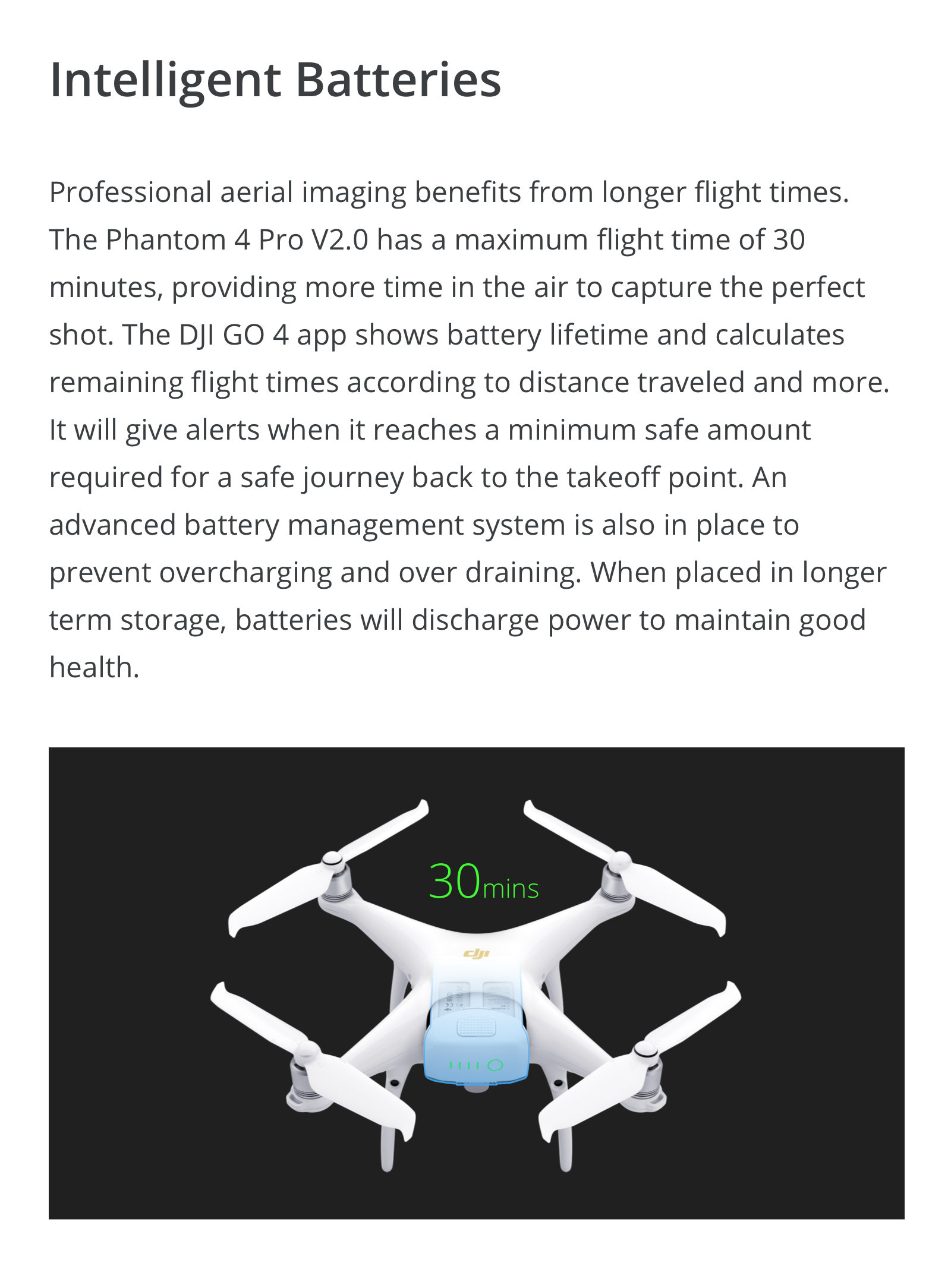 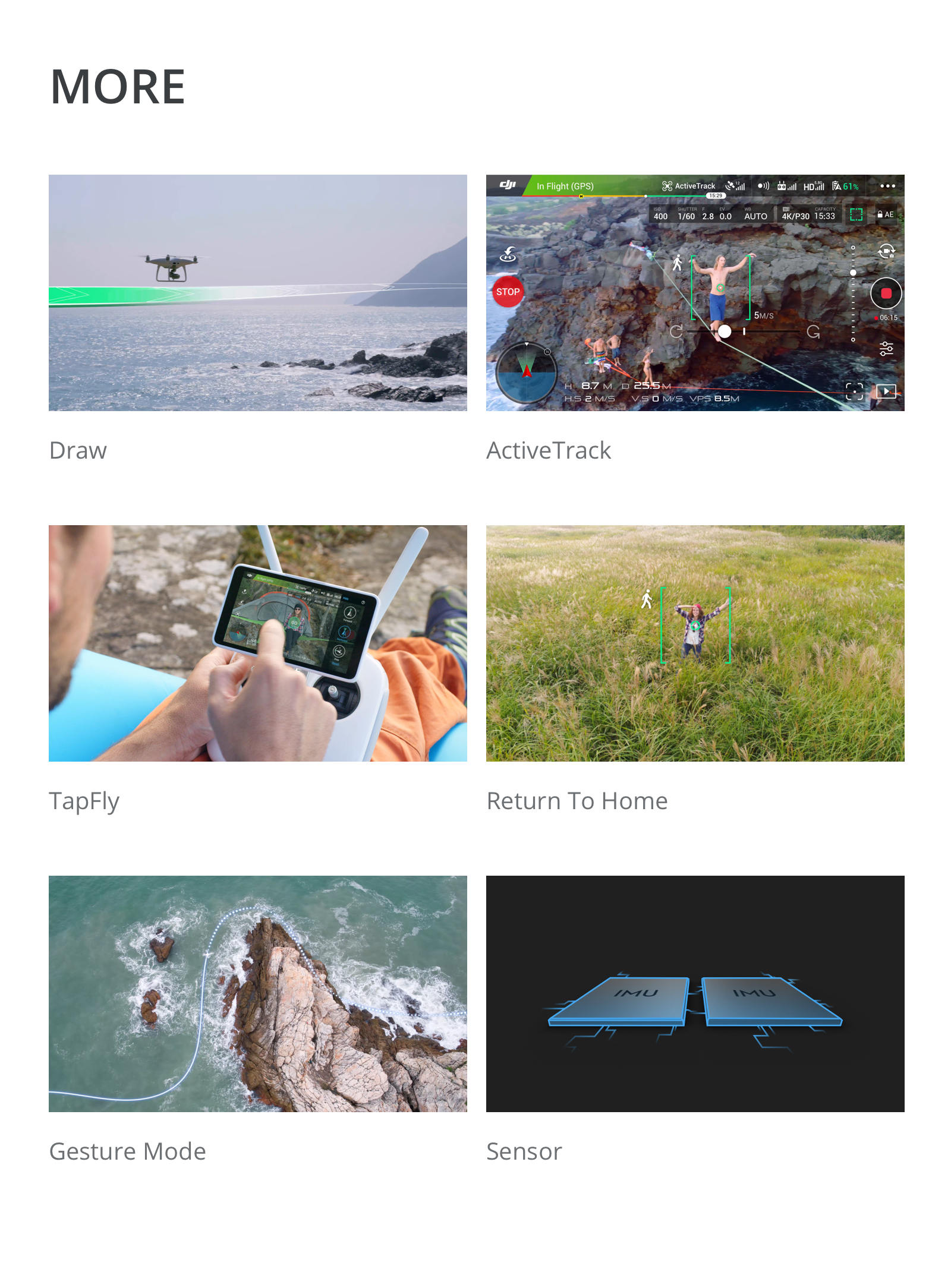